Parking is available in the public lots near the square and in the parking deck located on the UNG campus. All are within walking distance of the Festival. The closest drop-off to the MainStage Tent is at the corner of Hawkins and N. Park St behind the stage in Hancock Park. See the map here. 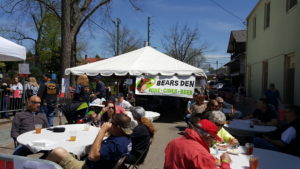 The Bears Den is a venue for festivalgoers to relax and enjoy a brew or a glass of wine or cider while visiting with friends and family.

Located across the street from the Mainstage Tent, adjacent to the Food Court and Hancock Park, this venue is open to all ages, although anyone wishing to partake of alcoholic beverages must be carded before ordering.

So come in and enjoy fine local and regional beverages in a relaxed informal environment, while resting your weary feet a bit.

At the Old-Time Mountain Dance, John Kelley will call some simple group dances with live musical 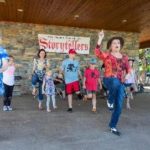 accompaniment provided by the “Beary” Good Stringband. The dance takes place at 6 pm on Saturday in Hancock Park and is fun for all ages! No experience is necessary.

Can I bring my dog?

Dahlonega is very dog friendly, so we do not prohibit dogs at Bear on the Square except in the MainStage Tent – it gets crowded and loud in there which is not a good environment for your furry friend. Be aware it also gets crowded in parts of our Artist Market. As always, you are responsible for cleaning up behind your dog.
Rover.com says make sure your dog displays these traits to know your pooch is festival ready:

A variety of food trucks are located near Hancock Park. There are also numerous restaurants on and around the Square. The application for food vendors is here; deadline is February 4.

How did the festival get its name?

Dahlonega’s Bear on the Square has been a local legend, going back to the time when a bear cub took refuge in a sycamore tree on Dahlonega’s Historic Square.

The story began on a spring morning in 1996, when a mama bear with two cubs made her way into the town’s historic square, causing a “big commotion.” The mama bear and one cub apparently escaped from town after being seen on North Grove Street later that afternoon. The other cub, however, decided to climb the sycamore tree, where it remained for several hours. The cub was eventually coaxed down from the tree by Forest Service rangers and was delivered unharmed back into the mountain woodlands.

After the bears’ Dahlonega adventure, several local residents began kicking around the idea of throwing a “party” to give a boost to local businesses; this ultimately led to what is now the annual Bear on the Square Festival.